RAD is a fun, weird, rogue-like game that is incredibly approachable for all players. Whether you love the challenge of sudden death or you just want to branch out, Double Fine has made a game that caters to both sides and has fun doing it. The heavily 80’s inspired content is refreshing and quite enjoyable from the soundtrack and over-saturated colors to cassette tapes and floppy disks as currency.

I’ve had a lot of fun with RAD, even though I can tell I’ve really only scratched the surface. Trying to work with suboptimal body modifications is pretty funny in and of itself, and discovering new mutations and lore has been intriguing. I don’t think any studio other than Double Fine could have made the post-apocalypse this entertaining.

RAD has a lot to offer, even to those who don’t necessarily dig the roguelike genre. The 80s references are going to appeal to every adult of that generation, the world is a beautifully-imagined hellscape, and the controls are refreshingly easy to grasp. The latter certainly isn’t perfect, as it’d be nice to be able to switch between items instead of having to drop one before picking something else up and using it. But for beginners, RAD is refreshingly simple to pick up and play.

RAD, simply put, is an excellent game. The roguelike elements stand out, especially the hub you upgrade and the bank for saving cash between runs. It makes sure every time you die; you feel you have progressed, even if it’s just a little bit. Its music, graphics, and the presentation as a whole are superb.

The synth music and neon artwork scream 1980s and all the old tech makes an old man like me thrilled. Its environments are varied, as are its enemies and it will take you a while to see everything on offer. I’ll be playing RAD for a long time to come and it could possibly take its place as my current go-to roguelike.

Despite being pretty difficult, RAD is a great game with a fantastic sense of style and fun gameplay that helped make me less frustrated every time I was sent back to the start upon death. RAD’sprocedurally generated environments and radiation powers, among other things, makes each level interesting and unlike the previous encounter. Along with daily challenges that test your speedrunning skills or provide certain power-ups, there are even more reasons to keep coming back to the game. 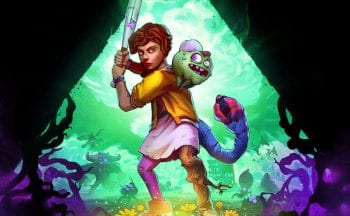 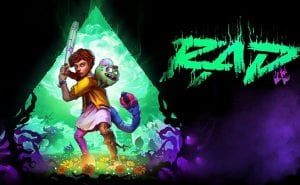