These little niggling things don't significantly detract from what is most certainly an improved instalment in the Watch Dogs series. At about 15-20 hours long, there is a lot of substance here; it's detailed, interesting, and, above all, fun. The art of hacking in Watch Dogs 2 produces gameplay variety that fans of the series will appreciate, and this, combined with an engaging roster of characters, a detailed world, and online that is a lot of fun, means that Watch Dogs 2 is definitely one to keep on your radar this year.

The Verge – No Score

The first Watch Dogs used hacking as just another weapon. The sequel turns it into something much more important — and fun. 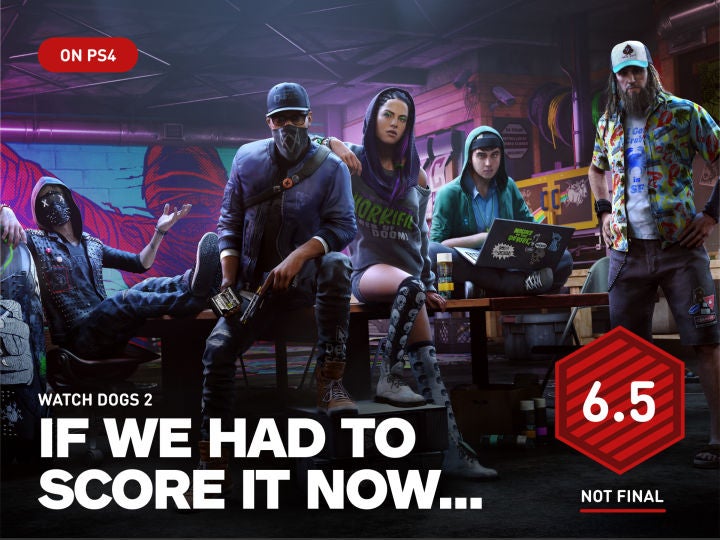 If I had to score it now, I’d give it a 6.5 for okay, because I don’t think people should buy it right now unless they have no interest in the multiplayer portion. I do hope and expect that I’ll be able to raise that score in my final review, which will come later this week.

You can have a lot of fun playing Watch Dogs 2 offline, but multiplayer–when it works–shouldn't be ignored. There are emergent PVP events that allow you to hack or hunt down other players, and special missions where you and a partner can infiltrate networks and private property together.

I was expecting Watch Dogs 2 to be more enjoyable than its predecessor, but I didn't expect it to be so well designed and full of heart. Watch Dogs 2 isn't reinventing the open-world game and fans of Ubisoft's special brand of go-places-and-pick-things-up gameplay will feel right at home, but it's one of the best examples the genre has to offer – as long as you don't want to shoot anything.

Watch Dogs 2 is a great game as a rock solid action title, but being unafraid of its own nonsense is what makes it a truly pleasurable experience.
Oh, and I kind of love Wrench, DeadSEC’s masked, toaster-smashing geek. He’s just the right sort of cringe and I really want that mask.

Watch Dogs 2 is the Assassins Creed 2 of this franchise.
While the first game was an imperfect attempt at a novel concept, the second one upgrades on its foundations in every way possible and presents a game that is not only a more comprehensive experience but also fun to play on repeat.

Watch Dogs 2 is the jump forward in the series that the game needed to succeed. Comparatively, it’s what Assassin’s Creed 2 was to the first Assassin’s Creed if not even better. Watch Dogs 2 is definitely one of the sleeper hits of the year. I was expecting to have fun with it, but I wasn’t expecting to become absolutely transfixed with the incredible style, characters and storyline. It’s a must-play game and for those that own a PlayStation 4 Pro, you should definitely pick it up just for the visual feast alone.

Watch Dogs 2 gives you a beautifully crafted world, jam-packed with NPCs blessed with individual personalities, helping to make this fictionalised version of San Francisco feel important and alive. It’s a real shame about the framerate issues connected to the seamless online connectivity, because Watch Dogs 2 gets everything right, from the mechanics to the story to the world. Issues aside, if you’re in need of an open world game that feels like a much needed injection into a fatigued genre, Watch Dogs 2 does it effortlessly.

Not bad at all but with some issues performance wise and also the rote gameplay I don't feel the need to ever return.

Watch Dogs 2 is a game that wants to take you on a whistlestop tour of San Francisco’s not-so-hidden underbelly. For a game with a central cast of disenfranchised youths, I found it oddly relatable and compelling. Every bone in my body ached for me to hate DedSec, but instead I totally fell in with them and everything they were about. Marcus Holloway is to Watch Dogs what Ezio Auditore was to Assassin’s Creed: the symbol of a new era, the mascot of a franchise that has proved it shouldn’t be judged on first impressions, that has proved it can move with the times. It’s a strong, smart game that never takes itself too seriously, and the result is pretty special.

With a wealth of gameplay options and a welcome degree of freedom, Watch Dogs 2 is a stellar entry in Ubisoft’s open-world hacking franchise. Minor technical and narrative concerns aside, there’s no reason for you not to check out one of the better games of this year.

If you loved the original Watch Dogs then the sequel dons psychedelic shades and ups its game. But in a post-GTA V landscape that's not going to be enough for everyone in 2016.

We Got This Coveres: Review in Progress

Control issues aside, I thoroughly enjoyed my time with Watch Dogs 2, and that mostly comes down to the vibrant and lovingly crafted world that Ubisoft has on display. There’s plenty of secrets and cool moments to experience throughout San Francisco, and while an odd glitch or low-res texture might pop up here and there, it’s hard to fault Ubisoft when it comes to their ability to craft virtual cities. With an emphasis on choosing your own playstyle, and a colorful city and cast of characters, Watch Dogs 2 stands out from the crowd in a holiday season that’s packed full of shooters, but strangely devoid of open-world games.

And buy it you should. Watch Dogs 2 is the game that the first one should have been and is a shining example of Ubisoft’s already proven ability to respond well to feedback. It offers true freedom and creativity to play the way you want, laugh out loud moments found in scripted events and self-made fun in a virtual city that needs to be seen to be believed. Starring characters that you’ll genuinely care about the more you get to know them you’ll have no trouble finding motivation to see this one through to the end. Put this one on your Christmas list.

Unfortunately, I have yet to finish the game's primary story and neither has our primary reviewer for this title, Jaz Rignall. In addition, Ubisoft took down the game's seamless co-op mode during the review period, due to some reported crashes. I joined a co-op mission and had a player try to hack me while the system was up and both operations were fun, but without more time spent in online, we're reticent to give the game a final score.

Watch Dogs 2 builds upon the strengths of the original game, whilst polishing up aspects that lacked depth to deliver a coherent, comprehensive experience. Its diverse cast and (mostly) thought-provoking narrative trump the occasionally repetitive, maddening gunplay, and though the urban youth humour occasionally falls flat, for the most part its characters feel, talk, and react convincingly. The lengthy story mission alone offers hour after hour of combat and exploration but, unlike the original, I'm left wanting more once it's all over… and this time, for all the right reasons.